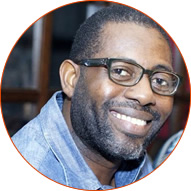 Femi is an award-winning Writer, Producer/Director and photographer who is widely respected for his creativity and professionalism. He has worked in the Nigerian motion picture industry and has created and produced several critically-acclaimed entertainment programmes for television and radio.

Trained in Film & TV Production at Montana State University,Bozeman, United States, he worked for a couple of years as a Producer at KUSM Channel 9 TV station in Bozeman, Montana.

A renowned name in advertising and marketing communications in Nigeria having directed memorable television advertising formany of Nigeria’s blue-chip multi-national companies. He worked as Film & Radio Producer at Lintas Advertising and later as Associate Creative Director at STB-McCann, Lagos. In these places, he wrote, directed and produced several notable documentaries, dramas and commercials for such multi-national concerns as Coca-Cola, Unilever, Nestle,Cadbury, Beecham, Rekkit-Benckister, MTN, CELTEL and manyother FMCG marketers.

Since 1999, he has worked as an Independent Producer/Director. His screen credits include “Like father, like son” (a TV sitcom) “Who do you Love?” (SFH talkshow), “Who wants to be a Millionaire?” (Nigeria’s most popular gameshow), the recent “Lagos Lottery TV Gameshow,” the international documentary “Life in Lagos”(2002) for CFI in France, “Oui Voodoo”(2005) “Metamorphosis”(2006) “Bar Beach Blues”(2004), a short drama which won best short film at the Zuma Film festival, and “Maroko” (2006) a full-length feature.

In the last year he has produced “Mama Put” a New Direction short film and also a documentary titled “Ibadan – Cradle of Literati.”  Femi is also currently the Content Producer of the first-ever Soap-opera commissioned by MNET in sub-saharan Africa titled “TINSEL.”

From 2003 to 2006, Odugbemi served as the President of the Independent Television Producers Association of Nigeria (ITPAN). As President of ITPAN, he worked assiduously to create international platforms of collaborations and cooperation amongst motion picture practitioners within the African continent. Persuaded that many professionals in Africa face the same professional and environmental challenges of technology, budgeting, audience development and distribution, he has demonstrated commitment to nurturing corporate access into the entertainment industry as a way of addressing global imbalances in skills and resources.

At the same time, Mr. Odugbemi Chaired the Lagos International Forum on Cinema, Motion Picture and Video in Africa, an annual film event since year 2000, designed to invite international attention to the opportunities and potentials of the motion picture industry in Africa. The last such Forum, held at the Lagos Business School, Lekki, Lagos in July 2006 and it attracted participants from France, South Africa, Zimbabwe, United Kingdom, Ghana and all the countries in West African Sub-region.

Recently, Femi Odugbemi was appointed by the Honourable Minister of Information and National Orientation to the Steering Committee of the Motion Picture Council of Nigeria, (MOPICON), the nation’s highest regulatory organ for the film industry.

In 2005 FemiOdugbemi was a featured speaker at both the Africa Business Conference of the Harvard Business School, Boston, and the World Cinema Festival/ Sithengi Market in Capetown South Africa. His work as a Producer/Director aspires to be challenging, innovative, and different. His goal is to explore to its fullest, the vast potentials of this creative craft to thrive, enrich, educate and entertain.